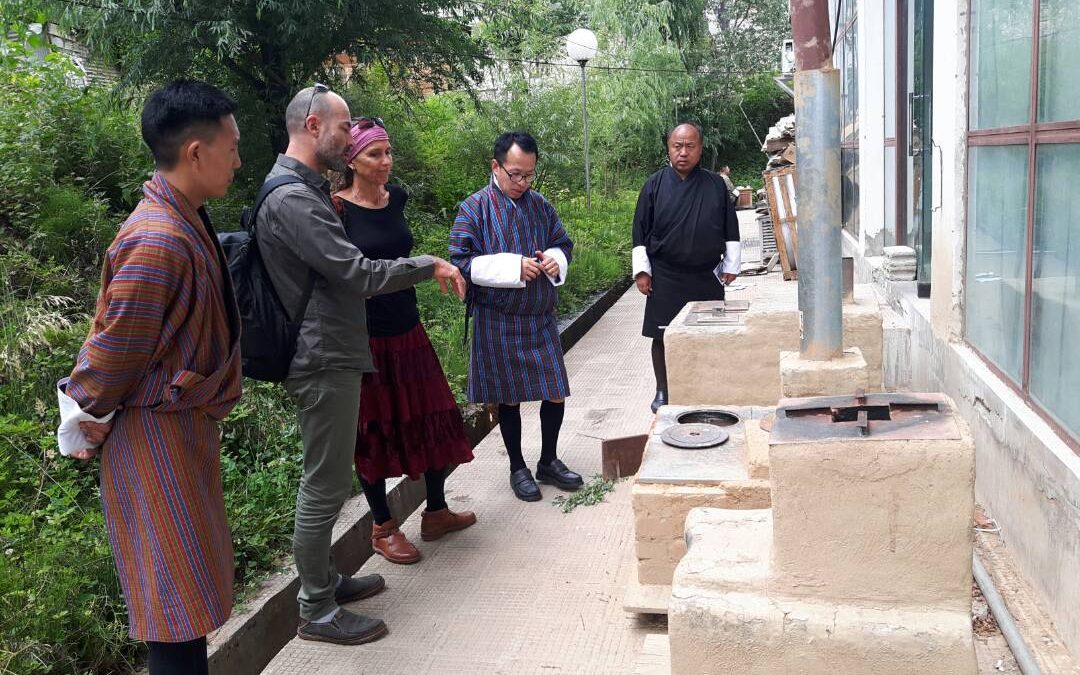 Back in May a new good friend of ours, Kezang (from Bhutan) sent me a message asking if I was interested to come to Bhutan with a view to exploring the options for taking the Himalayan Rocket Stove there. I asked Chetana if she was keen… she was! So off we went, with me as CEO and Chetana in the role of CFO, to Bhutan on a 10 day business trip hosted by Green Public Procurement Bhutan (GPPB).

We soon found ourselves with a fairly full schedule of meetings with various Govt Depts, including the Gross National Happiness Commission (GNHC) and the Dept. of Renewal Energy (DRE). Kezang was overseeing our time in his informal capacity as the ex-director of the GPPB, and more formally we were hosted by the delightful Yeshey Penjor in his role as the current director of the GBBP. Without fail, every person we met in Bhutan was extremely gracious and welcoming.

The timing was perfect, we flew into Paro and transferred to our accommodation in Thimphu, an apartment with amazing views over the capital that was generously made available to us by a dear friend Naomi who was in the middle of a 12-month volunteer project there. She was away when we arrived, so we settled in and made ourselves familiar with the lay of the land by scanning through the Lonely Planet guide book she had on her bookshelf, and more importantly, going out for a Panda beer with Kezang.

Our meetings were bunched together on the first few days which was great… we had a chance to spend time at the DRE talking with the director Mewang, and also viewed some of their previous versions of efficient cook stoves. Then directly to a meeting with the secretary of the National Environment Commission (NEC), followed up with a final meeting for the day with the GNHC.

The following day was an auspicious meeting inside the main Dzong (fortress and administration building of Thimphu) where we were woefully under dressed. The formality of everyone in traditional garb is serious enough on the streets of Thimphu, but inside the Dzong it is a very serious affair. Not to worry, even dressed in our casual civvies, we were still made most welcome and spent 2 hours talking with the secretary of the Dratshang Lhentshog (the formal administration for the monastic community of the country) who was most intriguing and told us various tales about working for the previous King (K4, as he is popularly known) and the current King (K5).

After this round of meetings, we had a few days to explore, so we rented a motorbike and rode back to Paro so we could walk up to the famous Tiger’s Nest Gompa (Paro Takstang) as well as get a sense of life in the villages and see a bit of the country side. We combined this trip with a visit to Kezang’s wife’s parent’s house, where we had a delicious traditional lunch in their home. This gave us the chance to see how heating and cooking is done in a village setting, and we were surprised to learn that even the cow gets 2 cooked meals each day, made on a smoky outdoor ‘Chulha’ style combustion fire… potential for a smokeless chulha workshop!

After returning the bike to Thimphu the next day, we then took a jeep over the pass to another valley, where we again combined a bit of sightseeing with some peering into household windows to see how people lived, cooked and heated their homes in a village setting. The combination of meeting high level government officials with some informal field surveys gave us a snapshot of the situation in Bhutan. While far from exhaustive, it did provide a degree of insight we certainly didn’t have before visiting.

In the meetings, we were assessing the needs of various sectors to see if there was any suitability for the Himalayan Rocket Stove in any of its configurations. Heating village homes and town houses, cooking for monasteries and schools and heating institutions and schools were some of the options we explored. The rocket stove technology we have been developing could accommodate these options, but it needs to be a better fit than what is currently available to be viable.

The take away at the end of these meetings was not totally clear. Yes, they are interested in any technology that may benefit the people and environment of the country, but there were doubts about the need and viability for our stoves in a context where electrical power generation (from hydro) is relatively abundant, and timber for fire wood is very abundant. There was consensus that more efficient and cleaner combustion is a good thing, but the primary drivers for rolling out our stoves was not certain.

In Himachal Pradesh and Ladakh (Indian Himalayas) the primary motivator will be fuel cost savings in the villages, whereas style and novelty will gain attention in the towns and guesthouses. The latter could be a driver in high society Thimphu, as well as the fact that the heat output is far more effective than electrical heaters. The population of Bhutan is quite low (about 700,000 for the whole country) whereas Himachal Pradesh being of similar size and environment has a population more than 10 times this. Cost of wood in Himachal and Ladakh is considerably higher, which gives the impetus to seek a more efficient combustion device.

After a final round of wrap up meetings with Kezang and the GPPB (who invited us to their formal closing celebration – we were their last official guests before shutting down) we came to the following conclusions.

1. Send a formal letter to the director of the DRE to propose running a pilot project in Bhutan which we would set up and they would oversee
2. Set up the pilot project in conjunction with Kezang and our local partners in Bhutan
3. Assess the viability of the HRS stoves after a winter season to see which, if any, of the market sectors are keen to take on the stove
4. Consider the possibility of setting up production in Bhutan based on being the manufacturing and distribution node for the Eastern Himalayas, accessing the hill regions of West Bengal, Sikkim, NE state, as well as Bhutan itself. This would considerably increase the viability, particularly if the Govt. were to offer some tax incentives to do so.

The letter has been sent and we are now back in Chandigarh focused on getting stoves out of the factory here at the highest possible quality for the best possible price.

As always… stay tuned for more!