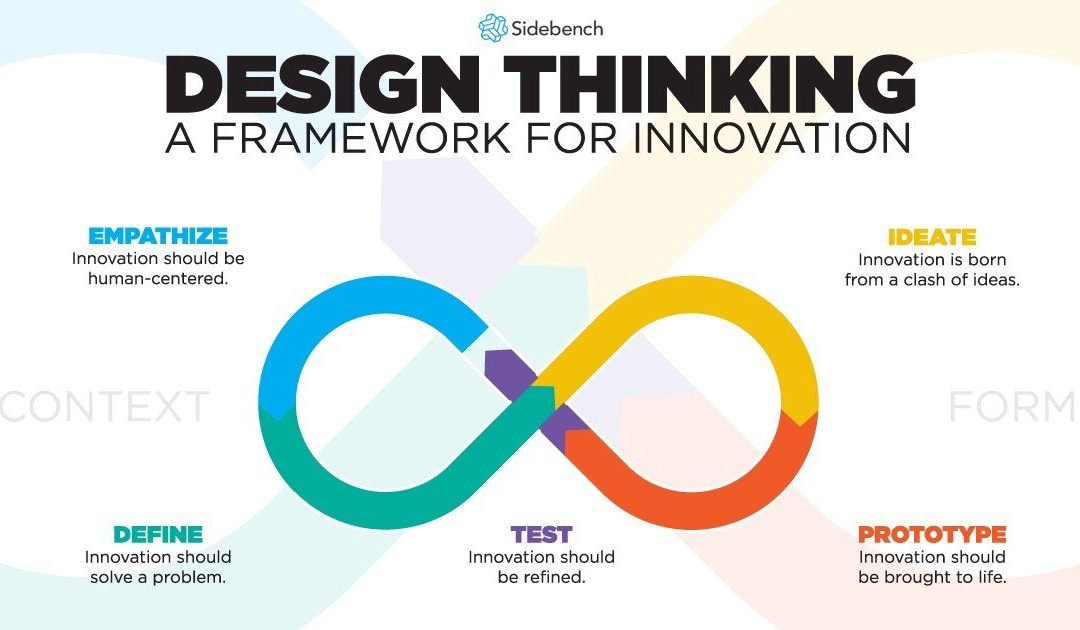 Designing for Context – a personal perspective

I first started pondering (and building) some form of ‘eco stove’ back in 2014. The first one was a rocket stove inside a box meant to serve as a combustion heater. It didn’t work, but it gave me a taste for the process of prototyping, for trial and error, for having an idea and testing it. In the testing process, an idea hits the hard edge of reality and indicates how well it predicted the variables involved. It either conforms to the nuanced complexity of physics in a way that is pleasing, or it doesn’t.

Usually, unless very lucky, first generation prototypes tend to not be as pleasing as one might hope for. However, they should render up useful information for the next generation of prototypes and testing. There’s an iterative process that goes something like this: Ponder, Make, Test, Review, Re-Ponder, Re-Make, Re-Test, Review, Etc

I recently listened to Tim Ferriss interview Sir James Dyson about his life and the process of inventing the first Dyson vacuum. I was surprised (and more than mildly relieved) to learn how much time and effort went into that invention:

Sir James Dyson: Yes. I suppose at the beginning, I thought it might take me a year at the most, and not as many as 5,000 prototypes. Ever the optimist, I thought it would be easier than it was. That’s always true with every development. It’s always much, much harder.

I still run, I actually do long-distance running. I have this thing called — everybody knows about the pain barrier. There’s a point three-quarters of the way through the race where it’s really starting to hurt and you can’t see the end and you want to give up. You go through that process with every invention, with every technology breakthrough. It looks brilliant at the end because from where you started and where you’ve ended up, there’s such a difference. There’s such a big leap, and it’s different to anything that’s gone before. So it looks like an act of brilliance. But it wasn’t. It was just hard work. It always takes four times as long as you think it will, and it always costs more money.

When I first heard this, I was relieved first of all to know that even famous inventors still methodically work through iteration after iteration of prototype to get to an end point of a working product that does something interesting, unique and valuable.

There is something that happens in real world testing that no amount of study, ideation and planning can predict with absolute surety… that meeting of the conceptual with the real.

With product design there are various factors that come into play and one of those I’ve learnt to treat with the utmost respect is ‘Context’. I can have an idea for something, build it and test it and find that it works… in my workshop. But will it work in a real world context? If so, which real world context?

When designing the original Eco1 Rocket Stove for people of the Indian Himalayas, the (relatively) easy part was making a rocket fired combustion heater. The hard part was making it suit the cultural context of a traditional family home in the Indian Himalayas. Height, shape, size, cooking positions, fire door access and directionality, ashtray size for burning animal dung, firebox size for burning particular shapes of wood, and more.

I am the first to admit that the Eco1 (link) is not a perfect design, in that it doesn’t perfectly solve all the design aspirations, but it does solve enough of them adequately enough that we are now entering the 5th winter season with the same product and several thousand current being used in the field. User feedback and word of mouth overwhelmingly drive our sales from season to season, and for each unit in the field, we can expect to sell roughly 2 more the next season. That’s as good an endorsement as I could hope for.

The improved Eco1 Mark2 version that I have been working on gradually over the last 2-3 years has been much slower to get to market for a number of reasons. Partly due to being not able to visit the Indian workshop for 2 years has certainly had an impact. Also the fact that improving on something that is already good is a tricky process. Tweaking one thing can come at the cost of other factors. But mainly it’s about being able to sit in the context and soak up the visceral experience of using the product in its proper setting and getting a “feel” for it.

I usually need to sit with and use a stove or heater for several days and weeks continuously to see what happens when it gets used and worn in. Watching the way the smoke flicks in and out of the feed tube. Noticing panels that buckle under high temperature stress. Seeing how it gets used by someone else who just wants a result from the thing. Mixing up quantitative measuring (like wood consumption or water boil timings) with the qualitative experience of the thing is what gives me useful feedback as a designer.

Quite often I’ll be pondering alternative ways to do something, without thinking directly about it. It’s like peripheral vision… except with ideation. I won’t stare directly at the issue, rather just ‘ponder’ off into the distance and allow for ‘peripheral pondering’ to notice things indirectly. Often this is running in the background while I’m doing something completely unrelated, and then suddenly something in the foreground triggers a connection to whatever is being processed in the background, and for a moment a convergence happens which brings the peripheral into focus.

I jokingly call these “genius” moments… but really, it’s just a process for allowing various parts of the mind to make connections that may or may not lead to something interesting. Noticing the interesting connections is a bit of an art, or a habit, or a learnt skill… I’m not sure exactly, but I’ve learnt to trust it and it certainly helps with solving complex problems.

Some time ago a design team in India contacted me as they were trying to find a solution for improving an high altitude kerosene burner for the army. They reached out to me for some reason, perhaps as I had released a video of my own high altitude combustion tests on the Eco1 (link). I looked at their designs and asked if their client (the Indian army) was interested in converting to biomass rather than kerosene. They said they would get back to me, and later did with a tentative yes. Now, I had already been thinking about how to solve this issue (high altitude heating for soldiers in remote locations living in tents) and had already ruled out kerosene for a number of reasons (fossil fuel, toxic smoke, polluting to the environment and hard to transport safely).

I gave it some thought, responded to the team and they went quiet for unknown reasons, so I decided to keep working on it myself. I drew up an idea and built the first prototype of a biomass pellet heater that had a small and easy to pack footprint. It worked surprisingly well for a first generation version, so I sent the design to my India team and they’ve been playing with it for a while.

Since I couldn’t join them to finish the design over there, I’ve been finessing the concept within an Australian context. In the process it organically evolved into 2 branches, the initial one was primarily a heater that could also be used to cook simply using biomass pellets. Then as a result of feedback locally, a second branch emerged which is primarily a cookstove that can also do simple heating.

One of the contextual limitations was to make it suitable for local manufacturing. That shifted the design orientation towards a simpler and cheaper build process that only involved CNC laser without folding or welding. (Folding and welding involve manual handling, the costs for this in Australia is higher whereas in India the cost for manual handling is low).

Since the cookstove design was slightly simpler than the original heater design, I decided to develop that first and now the Eco Stoves Australia Cooker is about to launch as its own branded product range. (www.ecostoves.com.au ) That was an unexpected consequence of being asked to solve for a heating solution for the Indian Army… and a good example of how following an idea down the rabbit hole can lead to unexpected outcomes.

Now that I have effectively launched the Eco Stoves Cooker, I am going back to the original concept for the Heater, and will incorporate much of the lessons from the Cooker into the design and fast-track that towards a product much faster as a result. Then I will go back to my team in India and give them the updated design to play with. They already have an earlier design and it has proved viable enough to be worth pursuing.

Remapping the locally oriented product to Himalayan conditions will invariably introduce new constraints, and the iteration process will begin again, however with more background info as a result of the Aussie testing. In fact, the Aussie variant has introduced new concepts into the design that were not part of the original idea and which will undoubtedly strengthen the overall concept as a result (such as being able to work with both pellets and small sticks).

Another of the (bigger) design challenges I’ve had running in the background for a few years now is a clean burning low tech high temperature waste incinerator. The parameters on this are extremely constrictive. Burning waste that includes various kinds of plastics is invariably somewhat toxic, however, burning waste in a low temperature fire (which often happens in India) is highly toxic.

There is almost no chance of a perfect solution here, but there is a very solid chance of an improvement on what is currently done whilst waiting for a better option. The argument against this is that by making a somewhat improved disposal of plastics more accessible, it will reduce the inclination to remove plastics from the supply chain all together. I can get on board with all these perspectives, and as a result, the ideation for a waste incineration solution has receded further into the background. But it has not gone away completely. I still have some processing allocated to it and whenever I encounter a signal that reminds me about the waste situation, I foreground the topic for a moment and see if there is any progress. So far, it’s still in ‘Research’ phase.

I thought to put down some of the processes for how I think about design, as it may seem from the outside to be a bit eclectic and perhaps not as focussed as it could be. Or perhaps that’s just how it seems to me! 

Amongst the various rabbit holes I’ve been peering into (waste oil burners, community cooking stations, dual pot clean cookstoves, local resilience cookers and heaters, agri-heating units and various kinds of space heaters and waste biomass pellet burners) there is a thread beyond merely quenching a latent tendency towards pyromania. There’s an ambition to make things that are genuinely useful, practical and sustainable. I know I’ve still got my best work in me, so I hope to live long enough to see some of it iterated into the light of day. 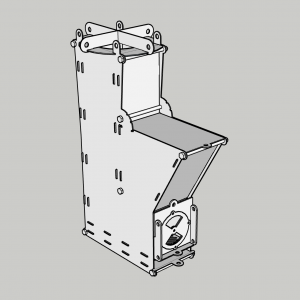 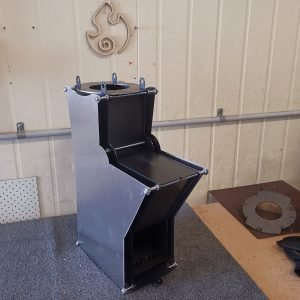 Rocket Man Designs is an R&D workshop dedicated to Clean Combustion Technology and relies on the generosity of several supporters and lenders without whom this work could not have happened. To those who have allowed me to free-range over a wide field of highly combustible possibilities, my unending thanks!

To anyone who feels curious enough to connect or get involved, feel free to reach out on admin@rocketmandesigns.com

Feature Image Thanks to https://sidebench.com/